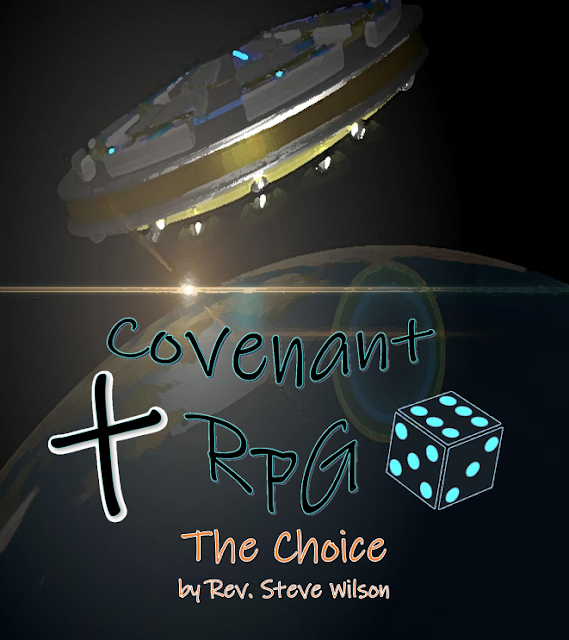 You wake up in a white metallic room. The bed you are lying on is quite comfortable, complete with a black cushion underneath you. Strangely, the black cushion pulses, as if it’s breathing. You are dressed in nothing but a magenta bathrobe. One other person, a black man, is waking up across the room.

Through the large window, you see space. Is that the sun in the sky? It looks even brighter today than it did yesterday. And now you notice that this room is refreshingly cool, unlike the Earth with its blistering heat and lack of water. Everyone knows that life on the third planet from the soonish-to-be white dwarf won’t last much longer.

On the other side of the room is a door, which shimmers out of existence as two spherical objects crackling in energy glide through. One is colored a dull orange; the other radiates cornflower blue.

The orange organic-energy thing emits words without opening any type of mouth,

“Welcome, chosen ones! You have been given a great honor and will serve your species well.”

The blue one follows: “Like yours, our civilization was once doomed to extinction. Atmospheric, geologic, and biological dangers abounded century after century.”

The orange being: “We even had wars over how to solve these problems, with some advocating for one way, and others a different method.”

Blue: “But we were finally able to stabilize our planet… and our society, and now we have come to offer your people a place with us. But only a portion of your people.”

Orange: “We’re sorry, but our planet won’t be able to support all of you. It is very small compared to yours. Out of the approximately 1 billion humans still living, we propose to take 50,000 of you. Though not all of your people will be saved, a remnant will be preserved.”

Blue: “But which humans to save? That’s where you come in. We have randomly selected you from your population to determine the criteria by which we choose the 50,000.”

Orange: “Because we’re not familiar with your species and what makes a person of your kind valuable, it will be up to you to identify the best of your people. The others, unfortunately, will remain here and die within the next year.

Blue: “We’ll leave you now to discuss. But we must have your answer within two of your days.”

Orange: “In the meantime, everything you need will be provided. If you’d like to speak to us, simply press the button by the door.”

“That was… interesting. What do you think? Oh, I’m Myron, by the way.”