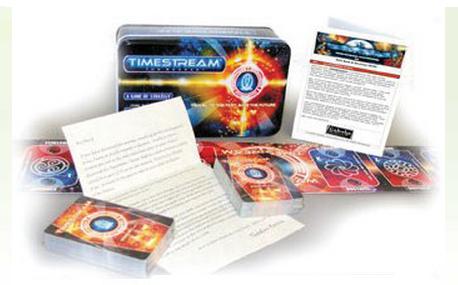 Made by Cactus Games, Timestream: The Remnant, is a Christian trading card game with a finish-line objective. Originally meant for two players, there have been fan-written rules to make it multi-player and the first player to play the Timestream card wins the game.

Gameplay involves both the Christian trading cards and a game board. Taking place in the year 3026, where religious beliefs have been outlawed, the players are members of a small group of believers called ‘The Remnant.’

Having discovered time travel, the players must travel to the Age of the Apostles and record biblical events. After they’ve completed this task, they must find and play the Timestream card, returning to their own time with their proof of Christ. The first player to bring this proof home by playing the Timestream card wins the game.


Pros
I enjoy the idea of time travel, and if I could travel through time myself, I think I would be doing  exactly as the players in this Christian card game — traveling to ‘the time of the Apostles.’

This storyline is a lot of fun, and the board and Christian trading cards in the game have some very appealing artwork.

Though the gameplay itself isn’t Bible-related, the theme definitely is. And with Bible verses written on the cards, it’s a great opportunity to have fun while learning about the Scriptures.


Cons
Unfortunately, as fun as Timestream: The Remnant is, there are a few cons.

Second, as this Christian trading card game has only released a single booster set, there is limited gameplay available. It makes it difficult to come up with new strategies and you may find yourself playing nearly the same game over and over.

Lastly, reaching the objective (being the first to play the Timestream card) can be done through luck in addition to reaching it through strategy. This sounds like a pro, and for younger players, it probably is a pro, but for experienced gamers, it can be anti-climactic.


Who Should Play It?
The recommended age for this game is 12 and up, which I agree with. The gameplay depends on your ability to read, so you want to be old enough to read quickly, and as far as I can tell, it’s only been released in the English language. With patience, I would say that kids age 10 and up could get a lot of enjoyment out of the game, though gameplay may take a little longer than the typical 45 minutes.