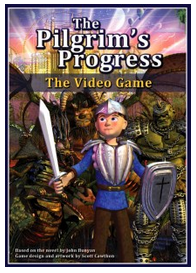 The Pilgrim’s Progress is a great Christian video game. Based on the book by John Bunyan, it doesn’t disappoint. There are twenty-one beautifully-rendered locations from the book, and it follows the same Christian allegory of the novel.

One of the greatest Christian pieces of literature, it was first published in 1678. The Pilgrim’s Progress has since been made into movies, television shows, and now this awesome Christian video game, by Hope Animation!

The main character is a pilgrim named Christian. At the beginning of the game, he is in his hometown, which is called the City of Destruction. He must work his way toward the Celestial City. He discovers along the way that he has a lot of atonement to do and must destroy his sins.


Pros
As a role-playing game, this Christian video game doesn’t only have the objective to reach the end and win. There are multiple objectives along the way, as you would find in other RPG’s, allowing the player to really reach out and make a difference in a truly Christian way.

The battle system is done in a way that the focus is on calling on God through prayer, to help you with His power. There’s a lot of spiritual warfare, as opposed to violence, which makes it great for kids.

Even with the great graphics, it doesn’t have high requirements for your PC so you can play it on nearly any computer.

It encourages the player to think in more Christian ways than the rest of society (and particularly the rest of the gaming world) does.

This Christian video game has a great interface, great gameplay, and enough strategy to make it possible to have variable replays.


Cons
The only con that I can see for this great Christian video game is that it’s a little old, so while the graphics are still really good, it’s getting a bit outdated and could use an upgrade.


Who Should Play?
The recommended age group for this game is ages 8 and up. It’s a good game for any age over eight—even though it’s easy enough to be a child’s game, it’s interesting and entertaining enough to satisfy an experienced gamer.

With minimal violence, and no bad language, sexual content, or occult references, it’s a great game that you can trust your kids with.