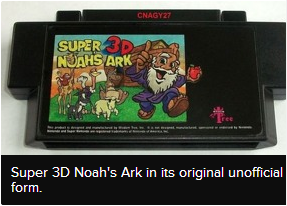 In the Christian video game, Super Noah’s Ark 3D by Wisdom Tree, Inc., you’re playing as Noah. You’ve been on your ark for a long time and a bunch of hungry animals are waking up early. As not many creatures enjoy waking up early and hungry, the animals are understandably upset.

As Noah, your only defense against the irate animals (mostly goats) is a slingshot full of sleep-inducing food (Thanksgiving turkey, perhaps? — actually, it’s coconuts and watermelons).

A non-violent first-person-shooter type of game, Super Noah’s Ark 3D has been released for several gaming platforms and is one of the few Christian video games that is being updated frequently to remain compatible with newer computer software.

This Christian first-person-shooter game achieved collector’s item status by being the one and only game released for SNES that wasn’t officially Nintendo-sanctioned. Color Dreams (a parent company of Wisdom Tree) was able to get past the lock-out chip legally by creating a casing around the game for an officially-sanctioned game to be placed in.


Pros
There are many great things about this Christian video game — namely, that it’s a Bible-based game and is non-violent without sacrificing any fun. A few of the other positive aspects are:

* The 20th Anniversary Edition runs on new operating systems, including Windows 8
* Both versions have 30 unique levels, and a variety of animals to knock out
* The improved graphics in the Anniversary Edition are high-resolution
* It can be purchased for as little as $4.99, so the price is right
* Opening doors requires answering Bible trivia questions
* Piko Interactive has released reprints of the collectible SNES game


Cons
While it’s difficult to find fault in an adorable Christian video game like this one, the original DOS version was reportedly difficult to use. (But what DOS game wasn’t?) The only other thing I have to say that could qualify as a negative is that there were definitely way more goats on this Ark than the real one. Although, goats being as hungry as they are, it could be argued that the same 7 goats were chasing Noah around the whole Ark, demanding food repeatedly.


Who Should Play
Mostly aimed at children, the Christian video game Super Noah’s Ark 3D is a non-violent, Christian game. It brings Noah to life for the player and brings a certain “what-if?” humor to the story of the Ark.

You don’t have to be Christian to enjoy this game, but it’s mainly aimed at Christians — being based on the Bible. Overall, it’s a great game for any parent that wants their child to have the enjoyment of first-person shooter games without the violence and gore usually associated with them.

You can still purchase this game on Amazon or Steam.