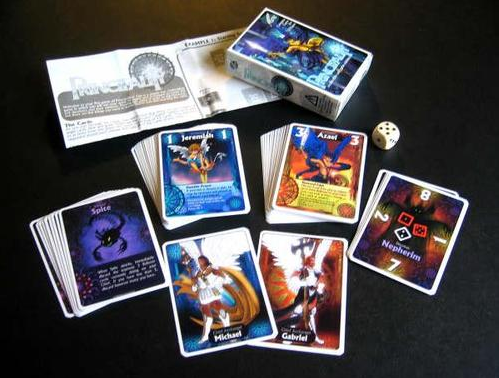 The Christian card game Principality by EPOS Entertainment has both players on the same side. The Gold team and the Blue team are racing against each other to see which team can bind 3 Deceiver cards first.


Pros of Principality
This is another Christian trading card game with quite a few pros, including aesthetics, gameplay, replay value, and more.

There are Scripture passages on the Archangel cards, making it a great conversation starter in a church youth group, and the anime style artwork on the cards will be appealing for all age-groups. The objective and rules are easy to learn, making it an easy game for all ages, and you can make it a match that is best of 3, best of 5, or even more.

The instructions for this Christian card game are in-depth and easy to understand. You may think that the replay value is limited due to it having only the one objective, but being a simple and fun game, I’d compare the replay value to a good, old-fashioned game of rock-paper-scissors.


Cons of Principality
I don’t think there are many cons to this Christian trading card game. There are two minor downsides though.

One is that very young players may lose interest before the game is over. This can be overcome by playing only one round as each round can take a long time to complete.

The second is that there was only one booster set released, and since that was in 2006, it doesn’t seem as though there will be any new releases to add to the game. The booster pack is called Choir of Angels and contains new heavenly protectors and a new Deceiver with its own new minions.


Who Should Play Principality
The Christian trading card game, Principality, is geared to children and adults, aged 8 and up, but it can be played with players younger than 8. It’s a fun Christian game with value for nearly any age as long as they can sit still long enough to play. Younger children can easily be accommodated, however, by simply changing the rules a bit to speed up the game.