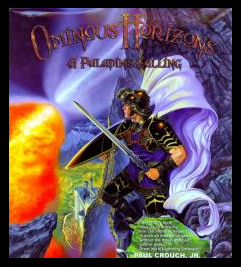 An Overview of Christian RPG Ominous Horizons
Satan has given his orders — prevent the printing of the Bible and the start of Western Civilization. As the young apprentice to Gutenberg, the publisher of the Gutenberg Bible, God calls on you to stop Satan and all of his minions.

Armed with the Sword of the Spirit, visit several areas of the Earth, trying to recover the pieces of the Bible that are scattered. Through Stonehenge, the Pyramids, castles, and haunted houses, chase clues to where the different pieces of the master copy of the Gutenberg Bible have been hidden.


Pros of the Christian Video Game Ominous Horizons
Even though there is some minor violence in Ominous Horizons: A Paladin’s Calling, it’s made clear that any violence is against forces of evil, using weapons of righteousness. This alone was enough to hail praise in many Christian video game reviews.

This is an all-around great game, with great graphics, gameplay, quests, and storyline.


Cons of Christian Video Game Ominous Horizons
This Christian RPG was released in 2001 and was one of the highest budgeted Christian video games ever created, costing N’Lightning Software Development, Inc. a whopping $1.6 million. Only 50,000 copies sold and the resulting financial stress caused the company to become defunct.

Unfortunately, the developers of this awesome Christian RPG and other Christian video games have been out of business since 2007. N’Lightning Software Development, Inc. also developed the Christian video games Catechumen and Bibleman. This means that the existing editions are limited and difficult to find, but if you can find this rare gem, do so.


Who Should Play Ominous Horizons?
The official rating for this game is 12 and up, and obviously, Christians will get more enjoyment out of it than non-Christians would. Being as great a game as it is, however, anyone would enjoy it.