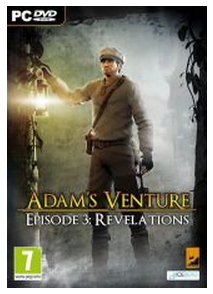 The third and final installment in Vertigo Games’ episodic trilogy of Christian video games about Adam Venture, this Christian RPG is not as good as its predecessor, but definitely has its good points. (Episode 2: Solomon’s Secret SPOILER ALERT) After being knocked unconscious and left for dead by the head of the Clairvaux Corporation at the end of episode 2, Adam is dreaming about the first time that he met Evelyn.

Adam has to battle the jungle of his own thoughts in Adam’s Venture—Episode 3: Revelations and return to full consciousness in time to rescue Evelyn and save the day.

Overall, the first half is great. Taking part in Adam’s mind, he has to remind himself what he is doing and why before his unconsciousness ends in disaster for Evelyn. During the second half of this Christian RPG adventure, Adam must (quickly) save Evelyn and the day. All this, while trying to use his wits to dismantle traps and puzzles that stand in his way.

Cons
Unfortunately, while the first half of the episode brings a welcome bit of background story to the characters and what they’re doing, the second half wraps up the series way too quickly. You’re playing the game and seemingly out of nowhere, the final cutscene starts up. This cutscene is then over as quickly as it arrived, rolling into the end credits, which leave a confused player and a few unanswered questions in their wake.


Who Should Play
Being a Christian video game, Christians will like it. It’s a puzzle-based adventure game with basically no violence, earning it the E for Everyone label. I wouldn’t recommend it to anyone that didn’t already play the first two games. As a part of the trilogy, the game is great for story, but it’s not a game that could succeed standing alone.