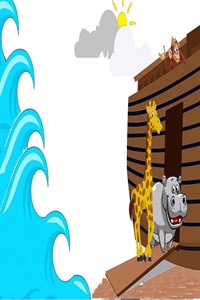 About Dash N’ Splash
This is a 3D game from JustinTime Studios, released in 2019. You play an intrepid Noah, getting ready for the Flood. You’ll meet his family as well as others in the world as you gather materials, solve puzzles, and explore the landscape.
There are 4 levels with a handful of quests to complete in each level. 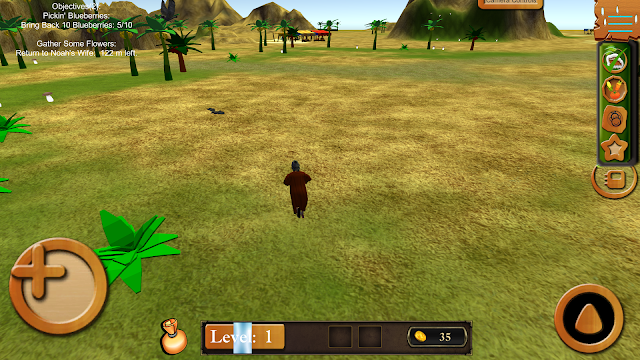 Pros
I love the 3D environment. The voice acting is charming. There’s a real child walking you through the tutorial. Noah’s wife has a pretty thick accent, giving the game some cultural authenticity. The same child voice actor also does his best to lay on an accent as Noah’s sons.

There’s not as much sound as you would expect in a 3D environment, but what’s there is good. The musical track is decent, though there’s not much variation there either.

Cons
First off, the game is buggy. I played through the first level twice, and the game froze at different points both times. There were also multiple times when I sank into the environment or couldn’t leave an area. The game allows you to enter the water but doesn’t give you a way to get out of it. It doesn’t even give Noah the courtesy of drowning him so that he can resurrect somewhere on dry land!


You control Noah with a joystick button, which, while it works well enough, doesn’t produce very smooth movement. If you’re playing on PC, which I was, you also can’t run and jump at the same time,as you need to use your mouse to do both. This may be a little more manageable on a touchscreen.

The quests are fitting to the world, but seem inconsequential. You need to gather flowers and blueberries (that look like mushrooms). As I was doing these fetch quests, they seemed to be nothing more than time-fillers. Besides that, some of the items I tried to pick up didn’t register. No matter how many times I clicked on certain blueberry mushrooms, I couldn’t pick them up.

While I appreciate the 3D environment, there seems to be a mix in the quality of the visual designs. You’ll see a very defined giraffe or flower, for instance, next to a rather undefined (coconut?) tree.

Finally, while I did find the voice acting to be charming, it was very unpolished. You could hear the actors tripping over their words or trying on different accents mid-conversation.

Unpolished is how I would sum up Noah’s Ark: Dash N’ Splash. It’s a good effort, and I would like to see the developer continue working on it because it does have a lot of promise. I can’t recommend it at this point, especially for the $22 price tag it’s listed for.

Who Should Play Dash N’ Splash?
I would categorize this game as being in alpha state. The developer created it in Unity, so I could see fellow Unity developers gleaning some good ideas of what to do/what not to do from the game.

It’s not ready for public consumption at this point, but I’ll be sure to update this review if JustinTime makes any significant updates to the game.