Adventures in Odyssey and the Great Escape (Good)

The gameplay is fairly simple as you play through a series of activities from the perspective of being in a video game. The story is a great illustration of temptation and our need to resist it with God's help.

Adventures in Odyssey and the Sword of the Spirit (Fair)

This game has a decent story and an animated art style that holds up fairly well. It also has a mix of puzzles, roleplaying, and platforming. Unfortunately, the platforming is rather difficult to control, bringing down the overall gameplay experience.

Adventures in Odyssey and the Treasure of the Incas (Excellent)
Platforms: PC, Mac
Publisher: Digital Praise, 2005

Get ready for a treasure hunt as you try to solve the mystery of Eugene's missing parents. You play as Eugene, Connie, and Whit in this puzzle game. There are also plenty of animated cutscenes and the great voice acting fans of the series love to help move the story forward.

Wow! This is an impressive game, and I certainly hope Scarlet City continues the series. Right now, you can play through the first 3 episodes in which you help the Scarlet Man (Jesus) restore The Great Engineer (God the Father) to the throne of this steampunk kingdom. The graphics are great, the gameplay is great, and there is plenty of allegorical content referencing Biblical stories. This is a must-play game for any Christian gamer.

This is a different sort of game that has you moving a red and blue ball simultaneously through different mazes as you walk through the Bible. Each maze is different, and you can do different things to get through them, so you won't get bored easily. It's a fun challenge and a review of major portions of the Bible at the same.

BibleMan: A Fight for the Faith (Good)

Based off of the episode of the series, you play as BibleMan and his teammates, defending the city against the Wacky Professor. Is it campy? Yes! That's part of what makes it fun. Also, the cutscenes are from the TV show, which brings back a lot of nostalgia for certain gamers. The only detriment is that gameplay can be a little slow, as you can only defend rather than attack.

Bounce the ball into the pieces to score points and reveal the Bible verse and graphic. There are three difficulty modes that determine the speed of the ball and plenty of levels to provide for extended gameplay. 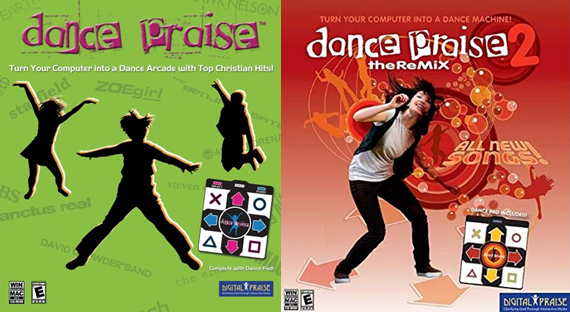 This game uses dance pads and popular Christian music tracks. Get your exercise and worship on at the same time! Plus, there are plenty of expansion packs that work with both games.

Your mission: infiltrate the arenas to disrupt the sacrifices to Moloch. The gameplay: repetitive. This is mostly a fighting game. The graphics are great, and the ability to upgrade your gear is a plus, but there's not much to the story. If you simply want some quick-paced fun, Champions of Canaan can hit the spot, but there's not enough depth here to play for an extended period.

Play as 5 of David's mighty men as you walk through some of the major events in the famous king's life.

Flood: The Prequel
I also worked on this game. Check out the game page!

This quiz game includes difficulty levels, multiplayer, and various game modes to let you answer a variety of questions or hone in on specific topics. In Race Mode, there's the added challenge of the timer. Besides the classic Church Edition, you can also purchase the African American edition, which adds a little color to the game's artwork.

Play along to some familiar Christian songs, both old anew! You can also get an expansion pack to add more tracks.

Play as the prophets trying to rid Israel of idolatry before the nation is overthrown by the Assyrians! This is a fun game that will get you into and thinking about the time of the kings and prophets in Israel's history. There's also a lot of variety and strategy involved, making it a very solid game. If you like the game, check out the original board game version.

The Light Rangers receive their mission from their mastermind Sunday School teacher and need to save the children of Angeltown from various sinful attitudes caused by the Maniac Brainiac. It's a great game with a good story, fun animation, and plenty of platforming action. There's also just the right amount of Christian teaching. As a bonus, you can play a Christian trivia game.

What is going on in this game?! The amateur art style would be charming if I could understand the story. You start walking around your town with no objective of where to go. Along the way, you meet friends and collect different neckties that give you different abilities. At certain points, you have to answer a trivia question based on a Bible verse. I feel like there's the beginnings of something worth playing here, but for now, it's all just a bit too random.

Play against the computer or against players in this game show trivia competition. Solomon is your host, and you can set the difficulty to an appropriate level.

This is a first-person shooter, but you're using food to put irate animals back to sleep as they ride the waves on Noah's Ark.

While not really a game, this interactive experience will encourage you as you walk through the life of Joel's parents, hearing real conversations that they had during the course of their young son's illness and eventual death.

This is a well-written, story-driven RPG Maker game with the option to either limit the battle mode or enjoy the strategy of combat.

Dance to all your favorite VeggieTales songs! This game comes with its own dance pad and a CD to play on any computer.