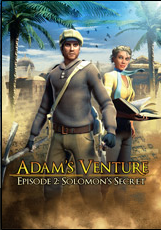 Another great Christian RPG from Vertigo Games, Adam’s Venture: Solomon’s Secret is the second installment in the episodic adventures of Adam Venture and Evelyn Appleby.

A game of skill instead of violence, this Christian video game is full of new puzzles and feats for Adam. The next step in his search for the Garden of Eden is interrupted by the need to find King Solomon’s secret treasure.

Adam and Evelyn find themselves held prisoner in Jerusalem after they’ve escaped the caverns of Eden at the end of episode 1. Help them escape their prison cell, then travel the streets of 1920’s Jerusalem with them before they go searching through Solomon’s Temple, still unsure of Clairvaux’s motive for hiring them in the first place.

The series seems to be very episodic in nature, which is both good and bad. While you can pick the series up in Solomon’s Secret, the way they dismiss important aspects of The Lost Garden as unimportant is irritating for returning players.

Ending with a cliff-hanger, this episode sets you up nicely for the next piece of this series.


Pros
The interactions between Adam and his erstwhile companion, Evelyn, are what really make the game. Their characters spend a lot more time in the same physical space in this episode than in its predecessor and it becomes clear who the real brains are in the operation. Adam is constantly underestimating Evelyn who, just as often, shows him up in her skilled problem-solving abilities, making their banter a source of solid comic relief.

The game saves automatically, and if you meet your doom, you’re automatically put back at the last check point.

It’s an improvement in gameplay over episode 1, with more (and better) puzzles.

As in The Search for the Lost Garden, Solomon’s Secret has incredible graphics. The cinematic scenes are a real treat.


Cons
There aren’t many cons, but the ones that there are include:
Can’t go back to previous games