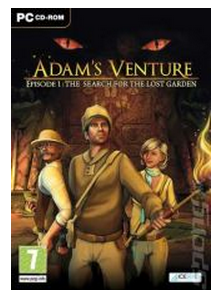 The Christian RPG, Adam’s Venture: The Search for the Lost Garden, is brief but fun. With its puzzle-based Christian gameplay, its complete lack of violence is keeping with the Christian video game genre.

Adam Venture, the main character, is an explorer who finds an old journal. The journal of Charles L’Heureux, a knight that lived in the twelfth century, points Adam to a scroll that is buried under a Templar church in France. What Adam finds on this scroll will lead him down a new and life-altering adventure — he believes he has directions to the lost Garden of Eden.

Help Adam through this adventurous Christian video game and save the Garden of Eden from the greedy hands of the Clairvaux Corporation.


Pros
The stunning graphics, made by Vertigo Games, with the Unreal 3 Engine, are probably the best I’ve seen so far in Christian role-playing games. With realistic movement, the 3D video in this Christian video game even has twisting shadows, reflections, and lighting effects that were quite advanced for 2009 games.

This is an ongoing saga, with at least 3 great episodes, making up for the brevity of each individual game.

The price is definitely right when you can download the game online for under $5!

It’s also always a ‘pro’ when a game is genuinely Christian, both overtly and covertly, as this Christian video game is.


Cons
One rather large downside to this otherwise great Christian RPG is that the game is so short! It would be worth it to get all of the currently available episodes and pretend that they are all just different chapters of the same game — which they actually are.

The fact that it’s so short and hasn’t much replay value (as it’s basically the same gameplay each time you play it) has earned this Christian game a bad reputation on many Christian video game reviews. Everyone seems to agree that it’s a great game with little to no plot and that it’s obviously meant to be a part of a larger whole.

The only other downside that I found with this game is that the controls can be awkward and difficult at times.


Who Should Play
Since this is an overtly Christian video game with Bible trivia and Gospel-based puzzles, it will mostly be enjoyed by Christians. And, as it’s completely lacking in violence, it’s great for people of all ages!